Why Google+ is dead last

Despite over 90 million people signing up for Google+ users aren’t doing much there. According to comScore, visitors spend an average of three minutes a month on Google+ versus 6-7 hours monthly on Facebook. Google+ is basically a ghost town compared to Facebook, which by the way, has over 845 million monthly active users.  Why such low engagement? 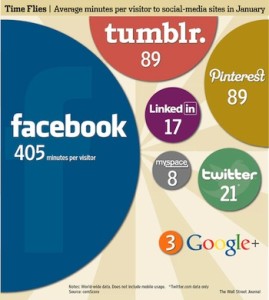 #1. Lack of differentiation. When Google+ launched last year, it was positioned as an alternative to Facebook where people can share comments, articles, photos, and videos with specific groups of friends and contacts. Gee, that sounds exactly like Facebook to me.

#2. No clear USP (aka they haven’t communicated their value). While Google+ has some original features—including “Hangouts,” which lets people start a video conference with up to 10 people—this feature isn’t enough to lure entrenched Facebook members away.

#3. Time = Money. For many Google+ is an additional tool that requires a significant time investment to build a network of contacts from scratch—time most people, much less small business owners, simply don’t have.

#4. Questionable Motives.  Facebook and Twitter changed the way people discover new things on the Internet, rivaling Google as the chief gateway to the Web. Plus, most of the activity on Facebook can’t be accessed by Google’s search engine. Let’s be honest…Google’s primary intent for Google+ is to obtain personal data about users to better target ads to them across all of Google. And that’s exactly what they are doing. Google+ acts as an add-on to other Google products like Gmail & YouTube by adding a social-networking layer on top of them. For example, Google+ members who search on Google.com can now get personal results that include content from Google+.

UPDATE: on April 2, 2019 Google finally pulled the plug and deleted all the content on Google+